Home About Us Irma Glez

Producer of our Mexico Destination

Irma grew up in Havana before moving to the US at age 12, giving her a first-hand perspective on both US and Cuban culture.

She has worked as a producer and translator for Vedado Films, and was production co-coordinator for Madonna’s 2017 trip to Cuba to celebrate her 58th birthday. She has also served as personal assistant, translator and coordinator for actor Joe Manganiello and racing driver Rodin Younessi during their visits to Cuba.

Irma has extensive experience in the music field.  She produced the release event for Chew Entertainment to celebrate the production of the album Two Beats One Soul with Cuban and American musicians during the Havana Jazz Festival in 2018, and has worked on music videos for the band FCuba.

In addition to her considerable work in the entertainment industry, Irma has served as a translator for several organizations and she has provided written translation of all material filmed during the production of the documentary, Royal Caribbean CUBA.  She also translated scripts for Pictou Twist and Cuba’s film agency.

She joined Cultural Island Travel in 2016 as a tour leader, making it her full-time job although she continues in the productions business, only when her free time from our groups allows it. In her own words ¨nothing compares to the joy I get when I make our travelers smile and enjoy what we have prepared for them.¨ Beyond her task as a tour leader, she loves exploring and planning every detail of our itineraries. She loves people, history and to have fun with all of her groups. She is great in paying attention to detail and will go out of her way to put smiles of joy in her clients face and all of her reviews confirm.

In 2017 she started to visit and explore Mexico as a tourist and she felt in love with the culture and people of the country.  Because of her experience as a general producer and her knowledge and affection for the place together with the whole CIT team we launched this destination with her as our main producer.

She is also a mom of a 9-year-old boy, motherhood, family and her profession are her life purposes. 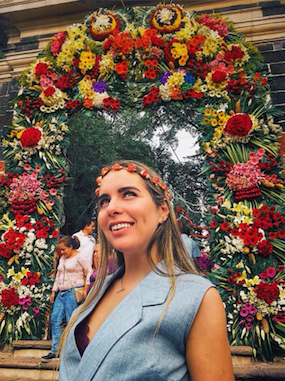 We both had a great time.

I don’t know if you noticed but when we left you at the airport Mary Kay started crying because she said she was going to miss you and Cuba.

Also, I want to thank you for going out of your way to take us to see Fernando and his work shop. He is so proud of what he does, as he should be. I’m sure I will never ride in a model T again!

“Most important was having Irma as our travel guide in Cuba. We have traveled extensively throughout the world and Irma’s ease of connecting with our group made for a perfect beginning. She also was able to connect with other guides we met as well as many local people to set the tone for a rich experience.

In addition, her knowledge of history, culture, and everyday life in Cuba was priceless. We had discussions that lasted the whole day without realizing how much time had passed. This will stay with us for a long time. Her enthusiasm made us appreciate the music and dancing on a daily basis.”

I just wanted to let you and CIT know what a great experience I had in Cuba! My tour guides, Irma and Ari were superb, and the drivers — Victor in particular — were great! Above all, the people of Cuba were warm and friendly. I enjoyed every site we visited in particular, Vinales! The tour group was fun to be with also. I will definitely visit Cuba again — possibly next year — to pick up where I left off. I left my heart (mi corazon) in Cuba!

Exciting News! Cuba has reopened as of Nov. 15, 2021. Call us today for more information on a trip to Cuba!!
Hello. Add your message here.